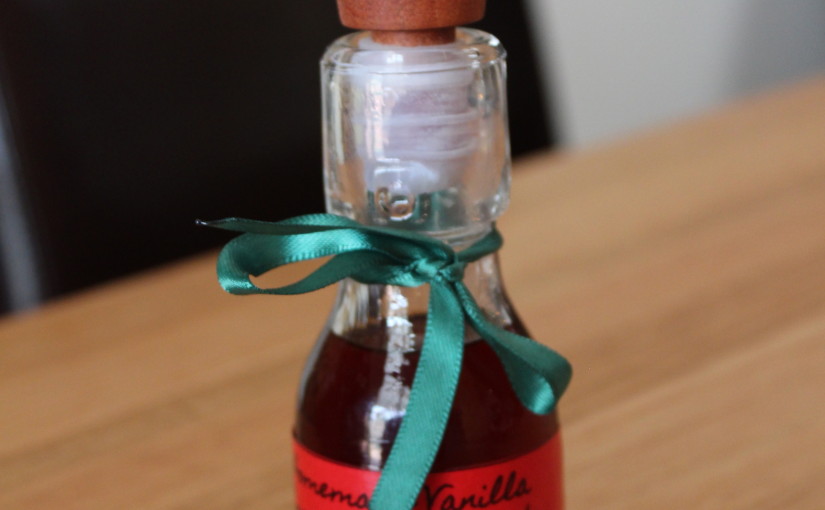 Catherine and I decided to make home made vanilla essence as part of our Christmas gifts for 2014. This turned out to be pretty easy, and result is really good. As part of that I turned bottle stoppers for the little decorative bottles we gave the essence out in. I also needed to explore what glue would work with silicone stoppers, which turned out to be a bit of an adventure.

For the stoppers I found some nice silicon bottle stoppers at woodcraft.com when I was in Texas on a business trip. Unfortunately I haven’t been able to find anywhere to buy these in Australia — ebay, aliexpress and Carbatec have all let me down. If someone knows where to get these, I’d appreciate a pointer in the comments.

Turning the bottle stoppers isn’t too hard, you just need to make sure that the dowel the silicone stopper goes on to is the right diameter and length and then you’re set. I shot this short video of me turning such a stopper, mostly because I wanted to play with video a bit:

I’d recommend using a food safe finish for these, just because it is food on the inside of the bottle. I used U-Beaut Food Safe specifically, which is a mineral oil. I turned a whole heap of these stoppers and then let our Christmas victims pick which ones they liked. As part of that I wanted to be able to clearly state what each stopper was made out of, so I stored them in a divided container.

My wife came up with some nice labels for the bottles. We applied those just by painting on PVA glue, placing a paper label and then painting PVA over the top. The PVA dries clear and the labels look super good.

Surprisingly to me, gluing silicone isn’t as easy as I thought it would be. When I stop to think about it, I should have planned this part better. It turns out we use silicone all over the place because its hard to get it to stick to things — think silicone bakeware or cooking utensils. Thus, gluing the silicone stopper attachment to the wooden handles was a bit of an adventure in itself.

There are specialist silicone glues available, but none that I could find a supplier for in Canberra the day before Christmas. Instead chatting to Steve Walsh and some googling seemed to imply that some CA (super glues) would work, or that Araldite might be another option.

I therefore shot another video which has my experiments with gluing silicone to wood:

And finally, the finished product:

Overall it worked out well!

You can see better pictures of the individual stoppers in the December turning wrap up post. I’d be interested in what people think of posting YouTube videos like this instead of just pictures. It was a fun experiment, but also a fair bit of work so I am not sure how often I will do it.

One thought on “Home made vanilla essence for Christmas”