This one has been on my list for a little while — a nice 10km loop around the bottom of Urambi Hill. I did it as an out and back, although there is a loop option if you cross the bridge that was my turn around point. For the loop option cross the bridge, run a couple of hundred meters to the left and then cross the river again at the ford. Expect to get your feet wet if you choose that option!

Not particularly shady, but nice terrain. There is more vertical ascent than I expected, but it wasn’t crazy. I haven’t posted pictures of this run because it was super foggy when I did it so the pictures are just of white mist.

The Tuggeranong Stone wall is a 140 year old boundary between to former stations. Its also a nice downhill start to a trail run. This loop involves starting at the Hyperdome, following the wall down, and the continuing along to Pine Island before returning. Partially shaded, and with facilities at the Hyperdome and Pine Island. 6km, and 68m vertically.

This wasn’t the run I’d planned for this day, but here we are. This runs along the Centenary Trail between Kambah Pool and Lake Tuggeranong. Partially shaded, but also on the quite side of the ridge line where you can’t tell that you’re near the city. Don’t take the tempting river ford, there is a bridge a little further downstream! 14.11km and 296 vertical ascent.

Be careful of mountain bikers on this popular piece of single track. You’re allowed to run here, but some cyclists don’t leave much time to notice other track users.

A first attempt at running to Barnes and Brett trigs, this didn’t work out quite as well as I’d expected (I ran out of time before I’d hit Brett trig). The area wasn’t as steep as I’d expected, being mostly rolling grazing land with fire trails. Lots of gates and now facilities, but stunning views of southern Canberra from the ridgeline. 11.11km and 421m of vertical ascent.

This one is probably a little bit less useful to others, as the loop includes a bit more of the suburb than is normal. That said, you could turn this into a suburb avoiding loop quite easily. A nice 11.88km run with a hill climb at the end. A total ascent of 119 metres. There isn’t much shade along the run, but there is some in patches. There are bathrooms at Point Hut and Pine Island.

Be careful of mountain bikers on this popular piece of single track. You’re allowed to run here, but some cyclists don’t leave much time to notice other track users.

I’ve been running on trails more recently (I’m super bored with roads and bike paths), but running on trails makes load management harder — often I’m looking for a run of approximately XX length with no more than YY vertical ascent. So I was thinking, maybe I should just write the runs that I do down so that over time I create a menu of options for when I need them.

This page documents my Tuggeranong runs.

This run includes Cooleman and Arawang trig points. Not a lot of shade, but a pleasant run. 9.86km and 264m of vertical ascent.

city2surf 2018 was yesterday, so how did the race go? First off, thanks to everyone who helped out with my fund raising for the Black Dog Institute — you raised nearly $2,000 AUD for this important charity, which is very impressive. Thanks for everyone’s support!

city2surf is 14kms, with 166 meters of vertical elevation gain. For the second year running I was in the green start group, which is for people who have previously finished the event in less than 90 minutes. There is one start group before this, red, which is for people who can finish in less than 70 minutes. In reality I think its unlikely that I’ll ever make it to red — it would require me to shave about 30 seconds per kilometre off my time to just scrape in, and I think that would be hard to do.

Training for city2surf last year I tore my right achilles, so I was pretty much starting from scratch for this years event — at the start of the year I could run about 50 meters before I had issues. Luckily I was referred to an excellent physiotherapist who has helped me build back up safely — I highly recommend Cameron at Southside Physio Therapy if you live in Canberra.

Overall I ran a lot in training for this year — a total of 540 kilometres. I was also a lot more consistent than in previous years, which is something I’m pretty proud of given how cold winters are in Canberra. Cold weather, short days, and getting sick seem to always get in the way of winter training for me.

On the day I was worried about being cold while running, but that wasn’t an issue. It was about 10 degrees when we started and maybe a couple of degrees warmer than that at the end. The maximum for the day was only 16, which is cold for Sydney at this time of year. There was a tiny bit of spitting rain, but nothing serious. Wind was the real issue — it was very windy at the finish, and I think if it had been like that for the entire race it would have been much less fun.

That said, I finished in 76:32, which is about three minutes faster than last year and a personal best. Overall, an excellent experience and I’ll be back again. 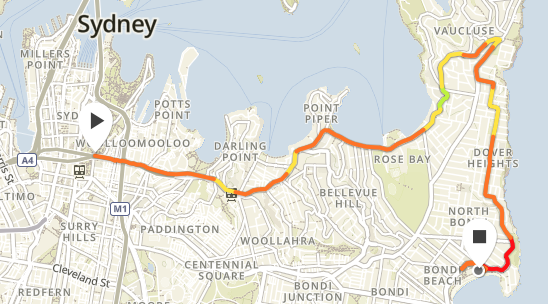 I registered for city2surf this morning, which will be the third time I’ve run in the event. In 2016 my employer sponsored a bunch of us to enter, and I ran the course in 86 minutes and 54 seconds. 2017 was a bit more exciting, because in hindsight I did the final part of my training and the race itself with a torn achilles tendon. Regardless, I finished the course in 79 minutes and 39 seconds — a 7 minute and 16 second improvement despite the injury.

This year I’ve done a few things differently — I’ve started training much earlier, mostly as a side effect to recovering from the achilles injury; and secondly I’ve decided to try and raise some money for charity during the run.

Specifically, I’m raising money for the Black Dog Institute. They were selected because I’ve struggled with depression on and off over my adult life, and that’s especially true for the last twelve months or so. I figure that raising money for a resource that I’ve found personally useful makes a lot of sense.

I’d love for you to donate to the Black Dog Institute, but I understand that’s not always possible. Either way, thanks for reading this far!